Some of you may remember seeing this painting displayed at the Fort Amador Golf Course. The painting now resides here in Gainesville, but its painter, John Haines, has kindly provided its backstory for the blog:

“For many years, the U.S. Army in Panama operated and maintained a golf course at Ft. Amador on the Pacific side of the Isthmus.  In the clubhouse, there was a bar and grill and on one of the walls there was a huge painting of the so-called “Colonels’ Row” of large, concrete officers’ quarters that ran parallel to the second fairway. (As an aside, in his novel, “The Tailor of Panama”, John LeCarre describes, somewhat inaccurately, in my view, the rather unique fairway on that second hole of the Ft. Amador Golf Course, but that is of no import here.)

Toward the end of the so-called treaty period, the Army terminated its operation of the golf course and the Panama Canal Commission took it over.  It was during this latter era–about 1988, I think–that I commented to some fellow golfers enjoying a post-round libation in the clubhouse, that the large painting should, in my opinion, be replaced with something more appropriate to the time and place and that, if there was only a way to get the thing to my quarters in Balboa Heights, I would be happy to give it a shot.  When I woke up the next morning, the painting was sitting in my carport!

Obviously it was time to put up or shut up.  Over the next few weeks, I took photos of a number of the fellows who regularly played Fort Amador GC on the weekends.  I then attempted to position them at various locations on the course’s visually spectacular 4th fairway and green. In the background, I put Ancon Hill with the flag of the Republic of Panama and the buildings along the shore of the San Felipe and El Chorillo areas of Panama City.  The finished painting was hung in the same place in the clubhouse.  While it certainly did not rival the ceiling of the Sistine Chapel, everyone I talked to thought it was a significant improvement over its predecessor.”

Thanks, John! You can view more of his artwork at his website: http://www.coronadohaines.com/ 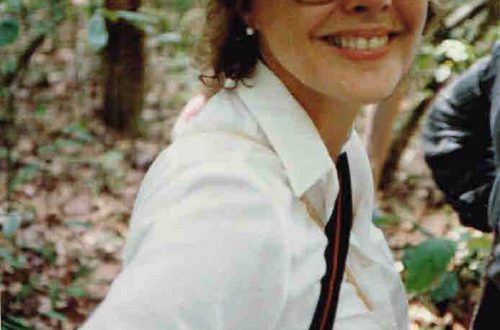